“Some artists draw ens? with an opening in the circle, while others close the circle.”

“In Zen Buddhism, an ens? (??, , "circle"?) is a circle that is hand-drawn in one or two uninhibited brushstrokes to express a moment when the mind is free to let the body create”

“The ens? symbolizes absolute enlightenment, strength, elegance, the universe, and mu (the void)”

“the circle is incomplete, allowing for movement and development as well as the perfection of all things.”

“Wabi-sabi, the beauty of imperfection.”

“When the circle is closed, it represents perfection, akin to Plato’s perfect form (Plato), the reason why the circle was used for centuries in the construction of cosmological models, see Ptolemy.”

“a person draws the ens? in one fluid, expressive stroke. When drawn according to the s?sho (???) style of Japanese calligraphy, the brushstroke is especially swift”

“Once the ens? is drawn, one does not change it.”

“It evidences the character of its creator and the context of its creation in a brief, contiguous period of time”

“Drawing ens? is a spiritual practice that one might perform as often as once per day.”

“spiritual practice of drawing ens? or writing Japanese calligraphy for self-realization is called hitsuzend? (???, "way of the brush"?)”

SLC notes: The scribe : way of the brush. Each one represents a day. Journaling. Connecting.

“logo, Landor colored an image of an ens? red. The designer intended the brushstroke to imply human creativity, and the red to convey urgency. They named it the "Innovation Ring".” 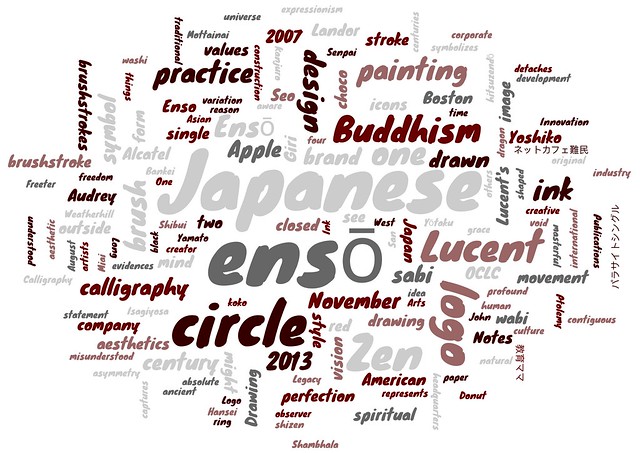