“paramilitary is a semi-militarized force whose organizational structure, tactics, training, subculture, and (often) function are similar to those of a professional military, and which is not included as part of a state’s formal armed forces.”

“Under the law of war, a state may incorporate a paramilitary organization or armed agency (such as a national police, a private volunteer militia) into its combatant armed forces.”

“Organizations that have been described as paramilitary are as diverse as the Minutemen, youth groups (from scouting to the Pioneer movement), and even martially-themed boarding schools”

“a combatant force or organization, more military-like than civilian.”

“equivalent to a military’s light infantry force in terms of intensity, firepower and organizational structure.”

“may also commonly fall under the command of a militar”

Irregular military forces: militias, guerrillas, insurgents, and so forth

Some kinds of police forces, such as auxiliary police

Militarized law enforcement personnel, such as SWAT teams in the United States

In the United Kingdom and Ireland, the term is often restricted to the various armed groups involved in the Northern Ireland Troubles, such as the Ulster Volunteer Force or the Provisional Irish Republican Army.”

The RENEA of Albania

The Basij of Iran

The Department of Homeland Security-related agencies in the United States

The GSG-9 of Germany

The Rangers of Pakistan

The Spetsnaz of Russia

The State Defense Forces of individual states in the United States

The Dignity Battalions of Panama

The Border Security Force of India

The Tonton Macoute of Haiti in 1959

The Pasukan Gerakan Am as Paramilitary Force of Royal Malaysian Police” 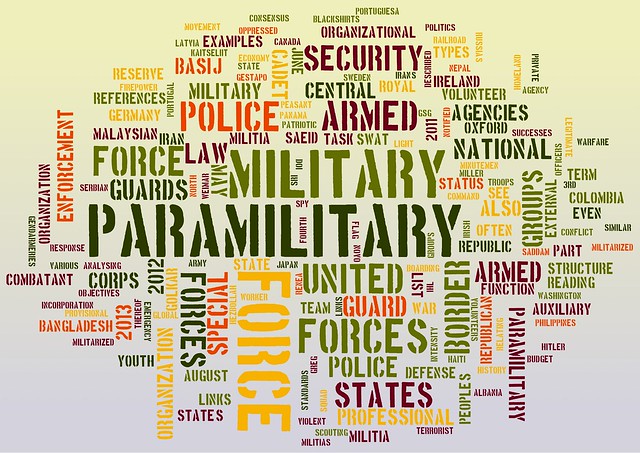