“His works of political and social commentary have been featured on streets, walls, and bridges of cities throughout the world”

“Banksy’s work grew out of the Bristol underground scene, which involved collaborations between artists and musicians”

“art auctioneers have been known to attempt to sell his street art on location and leave the problem of its removal in the hands of the winning bidder.”

“used stencils as elements of his freehand pieces”

“Stencil on the waterline of The Thekla, an entertainment boat in central Bristol – (wider view). The section of the hull with this picture has now been removed and is on display at the M Shed museum. The image of Death is based on a nineteenth-century etching illustrating the pestilence of The Great Stink.”

“August 2004, Banksy produced a quantity of spoof British £10 notes substituting the picture of the Queen’s head with Diana, Princess of Wales’s head and changing the text “Bank of England” to “Banksy of England.” Someone threw a large wad of these into a crowd at Notting Hill Carnival that year”

“August 2005, Banksy, on a trip to the Palestinian territories, created nine images on the Israeli West Bank wall.”

“in Los Angeles, on the weekend of 16 September 2006. The exhibition featured a live “elephant in a room,” painted in a pink and gold floral wallpaper pattern, which, according to leaflets handed out at the exhibition, was intended to draw attention to the issue of world poverty.”

““ There are crimes that become innocent and even glorious through their splendour, number and excess. ”

“journalist Max Foster coined the phrase, “the Banksy effect,” to illustrate how interest in other street artists was growing on the back of Banksy’s success.”

“To coincide with the second day of auctions, Banksy updated his website with a new image of an auction house scene showing people bidding on a picture that said, “I Can’t Believe You Morons Actually Buy This Shit.””

“Transport for London claimed that the graffiti created “a general atmosphere of neglect and social decay which in turn encourages crime” and their staff are “professional cleaners not professional art critics.””

“Banksy painted the same site again and, initially, the actors were portrayed as holding real guns instead of bananas, but they were adorned with banana costumes.”

“displays his art on publicly visible surfaces such as walls and self-built physical prop pieces.”

“Banksy has published a “manifesto” on his website. The text of the manifesto is credited as the diary entry of one Lieutenant Colonel Mervin Willett Gonin, DSO, which is exhibited in the Imperial War Museum. It describes how a shipment of lipstick to the Bergen-Belsen concentration camp immediately after its liberation at the end of World War II helped the internees regain their humanity”

“18 January 2008, Banksy’s Manifesto has been substituted with Graffiti Heroes No.03 that describes Peter Chappell’s graffiti quest of the 1970s that worked to free George Davis of his imprisonment”

“12 August 2009 he was relying on Emo Philips’ “When I was a kid I used to pray every night for a new bicycle. Then I realised God doesn’t work that way, so I stole one and prayed for forgiveness.”

“Banksy paints over the line between aesthetics and language, then stealthily repaints it in the unlikeliest of places. His works, whether he stencils them on the streets, sells them in exhibitions or hangs them in museums on the sly, are filled with wit and metaphors that transcend language barriers. ””

“Banksy was also credited with the opening couch gag for the 2010 The Simpsons episode “MoneyBart,” depicting people working in deplorable conditions and using endangered or mythical animals to make both the episodes cel-by-cel and the merchandise connected with the program. His name appears several times throughout the episode’s opening sequence, spray-painted on assorted walls and signs. Fox sanitised parts of the opening “for taste” and to make it less grim. In January 2011, Banksy published the original storyboard on its website. According to Banksy, the storyboard “led to delays, disputes over broadcast standards and a threatened walk out by the animation department.” Executive director Al Jean jokingly said, “This is what you get when you outsource.””

“The booth was manned by an unknown elderly man who went about four hours before making a sale, yawning and eating lunch as people strolled by without a second glance at the work. Banksy chronicled the surprise sale in a video posted to his website noting, “Yesterday I set up a stall in the park selling 100% authentic original signed Banksy canvases. For $60 each.””

“travelling installations that toured the city including a slaughterhouse delivery truck full of stuffed animals and a waterfall; and a modified painting donated to a charity shop which was later sold in an online auction for $615,000.”

In February 2015 Banksy published a 2-minute video titled “Make this the year YOU discover a new destination” about his trip to Gaza Strip. During his visit he has painted a few artworks including a kitten on the remains of a house destroyed by an Israeli air strike. (“I wanted to highlight the destruction in Gaza by posting photos on my website — but on the internet people only look at pictures of kittens”) and a swing hanging off a watchtower. In a statement to the New York Times his publicist said –

I don’t want to take sides. But when you see entire suburban neighborhoods reduced to rubble with no hope of a future — what you’re really looking at is a vast outdoor recruitment center for terrorists. And we should probably address this for all our sakes.”

“Banksy’s name and identity remain unknown, but a commonly cited 2008 Mail on Sunday investigation of several former schoolmates and associates stated that he is believed to be Robin Gunningham, a former pupil at the public Bristol Cathedral School.”

“There has also been speculation that Banksy is a woman,”

“or that Banksy is a team of seven artists”

“Regarding personal fame, Banksy has stated that “We don’t need any more heroes; we just need someone to take out the recycling.””

“barrier, including an image of a ladder going up and over the wall and an image of children digging a hole through the wall”

“April 2014, he created a piece in Cheltenham, near the GCHQ headquarters, which depicts three men wearing sunglasses and using listening devices to “snoop” on a telephone box, evidently criticising the recent Global surveillance disclosures of 2013.”

“Asked about his technique, Banksy said:

I use whatever it takes. Sometimes that just means drawing a moustache on a girl’s face on some billboard, sometimes that means sweating for days over an intricate drawing. Efficiency is the key.”

“Stencils are traditionally hand drawn or printed onto sheets of acetate or card, before being cut out by hand. Because of the secretive nature of Banksy’s work and identity, it is uncertain what techniques he uses to generate the images in his stencils, though it is assumed he uses computers for some images due to the photocopy nature of much of his work”

“as he was starting to do graffiti, he was always too slow and was either caught or could never finish the art in one sitting. So he devised a series of intricate stencils to minimise time and overlapping of the colour.”

“Banksy once characterised graffiti as a form of underclass “revenge”, or guerilla warfare that allows an individual to snatch away power, territory and glory from a bigger and better equipped enemy”

“a desire to mock centralised power, hoping that his work will show the public that although power does exist and works against you, that power is not terribly efficient and it can and should be deceived”

“components of the human condition that his works commonly critique are greed, poverty, hypocrisy, boredom, despair, absurdity, and alienatio”

“quoted as saying: “We are concerned that Banksy’s street art glorifies what is essentially vandalism.””

“In his column for The Guardian, satirist Charlie Brooker wrote of Banksy “…his work looks dazzlingly clever to idiots.””

“long criticised for copying the work of Blek le Rat, who created the life-sized stencil technique in early 1980s Paris and used it to express a similar combination of political commentary and humorous imagery”

“criticized the “obviousness” of Banksy’s work, and accused it of being “anarchy-lite” geared towards a middle class “hipster” audience”

“Banksy has self-published several books that contain photographs of his work in various countries as well as some of his canvas work and exhibitions, accompanied by his own writing” 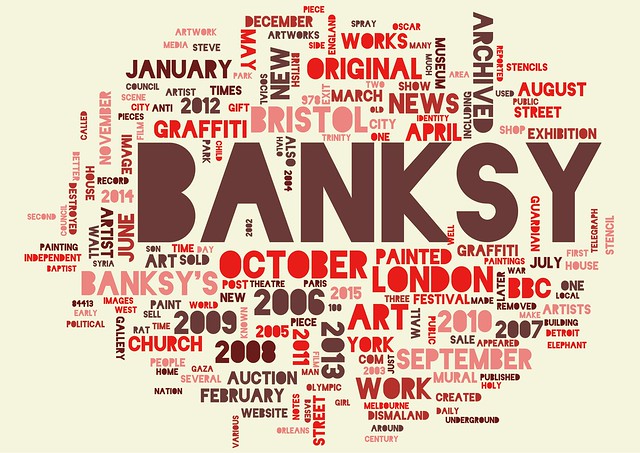