SLC notes: link to this image of The Fortune Teller

“Palmistry, or chiromancy (also spelled cheiromancy; from Greek kheir (????, ??; “hand”) and manteia (???????, ??; “divination”)), is the claim of characterization and foretelling the future through the study of the palm”

“There are many ? often conflicting ? interpretations of various lines and palmar features across various schools of palmistry”

“A palm-reader’s booth setup outside in Japan.”

SLC notes: link to image of palm reader in Japan

“Palmistry is a practice common to many different places on the Eurasian landmass; it has been practised in the cultures of India, Tibet, China, Persia, Sumeria, ancient Israel and Babylonia.”

“Several thousand years ago, the Hindu sage Valmiki is thought to have written a book comprising 567 stanzas, the title of which translates in English as The Teachings of Valmiki Maharshi on Male Palmistry.”

“From India, the art of palmistry spread to China, Tibet, Egypt, Persia and to other countries in Europe”

“Aristotle (384–322 B.C.E.) discovered a treatise on the subject of palmistry on an altar of Hermes, which he then presented to Alexander the Great (356–323 B.C.E.), who took great interest in examining the character of his officers by analyzing the lines on their hands.”

“Renaissance magic, palmistry (known as "chiromancy") was classified as one of the seven "forbidden arts," along with necromancy, geomancy, aeromancy, pyromancy, hydromancy, and spatulamancy (scapulimancy).”

“The skeptical Mark Twain wrote in Cheiro’s visitor’s book that he had "…exposed my character to me with humiliating accuracy."”

“1883 book, Palmistry – A Manual of Cheirosophy, which is still in print.”

“usually begins by reading the person’s dominant hand (the hand he or she writes with or uses the most, which is sometimes considered to represent the conscious mind, whereas the other hand is subconscious)”

“the other hand is believed to carry hereditary or family traits, or, depending on the palmist’s cosmological beliefs, to convey information about past-life or karmic conditions”

“hand shapes are divided into four or 11 major types, sometimes corresponding to the classical elements or temperaments. Hand shape is believed to indicate character traits corresponding to the type indicated (i.e., a "Fire hand" would exhibit high energy, creativity, short temper, ambition, etc. – all qualities believed to be related to the classical element of Fire”

“The number and quality of lines can also be included in the hand shape analysis; in some traditions of palmistry, Earth and Water hands tend to have fewer, deeper lines, while Air and Fire hands are more likely to show more lines with less clear definition.”

“Some of the lines of the hand in palmistry:

SLC notes: image of lines to share for guide

“three lines found on almost all hands, and generally given most weight by palmists:”

“interpret this line to represent matters of the heart, that is, more literally, our emotional living; it is therefore believed to be an insight into how the emotional sides of our mindframes will act out and be acted upon”

“chained or gridded heart line (or emotional line) is often seen in people who are highly strung, nervous and draw upon emotional strength and insight to attain their ambitions, i.e. they wear their ’emotions’ on their sleeves, often to draw strengt”

“chaining or gridding on the heart line (emotional line) is often seen in intensely creative artists such as musicians and writers, as well as deeply driven scientists”

“chained or gridded heart line is said to point to a flirtatious attitude to love, and one which can be prone to fall in love easily. On a physical level, the heart line is indirectly associated with heart”

“chained heart line is often associated with high blood pressure, but also of an ‘adrenaline junkie’ attitude in life”

“head line. This line starts at the edge of the palm under the index finger and flows across the palm towards the outside edge. Often, the head line is joined with the life line”

“represent the person’s mind and the way it works, including learning style, communication style, intellectualism, and thirst for knowledge.”

“life line is perhaps the most controversial line on the hand”

“fate line runs from the bottom of the palm near the wrist, up through the center of the palm towards the middle finger.”

“believed to be tied to the person’s life path”

“thought to reflect circumstances beyond the individual’s control, or alternately the person’s choices and their consequences”

“thought to relate to emotional intelligence and the ability to manipulate”

“Other markings – these include stars, crosses, triangles, squares, tridents, and rings under each of the fingers; their supposed impact and meaning varies by location on the palm and freedom from other interfering lines.”

SLC notes: other marking on the palm 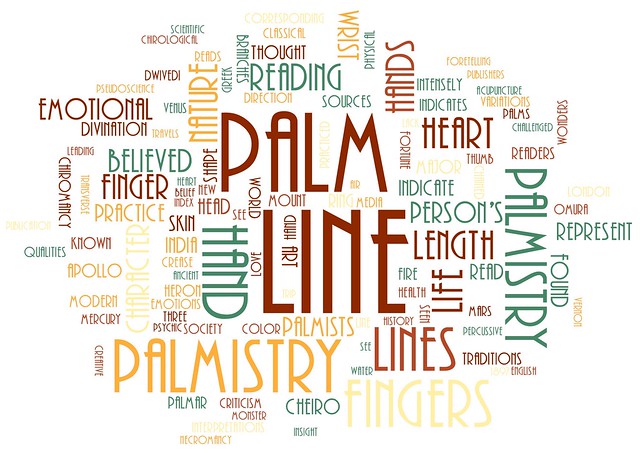